Old Ironsides was built out of a species of white oak.

Legislation was passed in November, 2004 proclaiming the oak tree the national tree of the United States. I suspect most of us think of oaks as large trees with majestic canopies and easily distinguishable leaves. Probably we think the leaves look like this:

But the number of trees in the oak genus, all of which are members of the Beech family, are reported to be between 400* and 600 worldwide. Michael A. Dirr and Keith S. Warren in their The Tree Book (2019) list the number as 530, including both deciduous and evergreen species. The outdated The Plant List includes at least 605 species and Tree Names lists 605 plants under Quercus.

There seems to be some question as to the number of oak species in North America, too. Many sources suggest there are about 90 species in the US and Canada (Dirr and Warren) while Sibley includes only 69 native species. There are at least nineteen species of oak in California alone. Many sources list the number of  varieties in the US at about 90, but state there are at least 160 species in Mexico. The USDA map for Quercus shows all states except Idaho and all Canadian providences have native or introduced oaks.

On top of the large number of species, the various species easily hybridize, often making classification difficult. Within the two broad classifications of red oak or white oak, though, the trees do not interbreed. Some recognize an intermediate form of Quercus called golden oak. This subgroup may consist of only five species, although other sources state that there are none in North America.

Both red and white oak trees are used for furniture, flooring, cabinets, veneers and paneling. Historically only three species of white oak have been used in cooperage and for aging whiskies and wines.White oak is more often considered for outdoor uses as it has greater rot resistance. Live oak, a type of white oak, was used to build what is currently the oldest commissioned warship in the world, the U.S.S. Constitution. “Old Ironsides” was launched in 1797! Some of the ways to tell the difference between red and white oak trees, as well as their respective lumber, are discussed here.

Acorns give a clue as to whether a tree belongs to the group of red or white oaks, as well as a way to identify the various species. Acorns are also much more variable than I believed as a kid. Some are hairy, others elongated, a few tiny and some huge.

Unfortunately, we have a lot of squirrels in our park and it is difficult to come across an intact acorn, but if you have an area with an abundance of acorns, this article discusses the foraging and processing of them for use in recipes such as Acorn Mousse and Acorn shortbread cookies. Guidebooks such as Sibley and the National Audubon Society Field Guide to North American Trees will usually include a picture or description of the nut to help with identification. While many species forage for acorns, other animals apparently can be poisoned when ingesting acorns, oak leaves, and bark. Acorns contain tannins and may be bitter. This can be remedied by repeated rinsing of the mashed meal.

Another reason acorns may be hard to come by in our park is the trees may not produce until they are twenty years old and the crop might not be considered a full one until the tree reaches fifty. According to this same source and others, the more bitter the acorn, the longer it will store.

An easy way to tell if an oak is a red or a white is by the leaf. White oak leaves generally have rounded lobes while red oaks have pointy tips. In many cases you have to look very closely as the tip is as thin as a hair.

With the large number of oak species, it might be of little surprise that not all oak leaves look like you might expect. Some do not resemble that typical sketch above in the least. To complicate matters, the same tree may have leaves of distinctly different shapes! (Sibley, P

There are twenty-six tagged oak trees in City Park, although a number of these are hybrids or varietals. For this first post in a series on Quercus, we look at variations in leaf form. I have ignored the leaves of the hybrids.

The photo below shows the Oriental White oak leaves growing on the tree. I would never have picked out either of these two leaves to belong to the oak family! 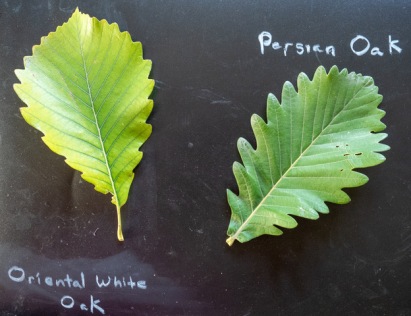 Although I do not have a photograph, as this tree is not on tree tour, there is a species called the Maple-leaf Oak. This endangered tree currently numbers only about 600. According to Sibley this oak is related to the Shumard, although the pictures of the leaves look  more similar to maple leaves than the skinny Shumard leaf pictured below.