Although a tropical tree in Australia is known as the lacebark tree, it appears to only grow in hardiness zones 9 and above, limiting its growth to warm coastal areas in the US. Two other species of tree, both from China, come in a lacebark version, the Lacebark Elm  (Ulmus parvifolia) and the Lacebark Pine (Pinus bungeana).

The elm version, also known as Chinese elm, has been introduced to much of the midsection of the United States. Although it is considered invasive in some areas, it has also been considered a good alternative to Siberian elms, which are more weedy. According to The Tree Book: Superior Selections for Landscapes, Streetscapes and Gardens (Dirr, Michael and Warren, Keith, 2019) this elm is useful in stressed environments and has been planted in parking lots, streets, and in parks. It is resistant to both Dutch elm disease and the elm leaf beetle as well as black leaf spots. Hardy from zones 5 through 10, it doesn’t drop its leaves until well into winter, and as may be expected from its name, its trunk is a major focal point when the bark exfoliates to reveal multiple colors.

The Tree Book features write-ups on thirteen different cultivars. Another somewhat unusual use of the species is in Bonsai. The leaves may be eaten cooked or raw and are said to have a pleasant taste which imparts freshness to one’s breath.

While Dirr and Warren state the lacebark elm is “easy to transplant and propagate,” they report the lacebark pine grows slowly and requires patience. It was first discovered in China in 1831. Often grown on temple and palace grounds, the tree is revered and in Korea the largest trees are considered national monuments. The species may grow for 200-300 years with the oldest trees closer to 900 years of age. Often in their native habitat they reach heights of 80-100 feet.* In North America this conifer is more likely to grow to 40′ to 50′ and have multiple stems.

This three-needle pine also has bark that exfoliates in irregular pieces, giving it the appearance of a mosaic. It may not start this process until it is ten years old. Colors which may appear include green, purple, white, and grey.

Although it has some resistance to diseases which attack pine trees, its wood is brittle and it may suffer damage in storms. The seeds from this plant are edible but no information has been given on how to prepare them. Turpentine extracted from this species may be used in a number of medicinal remedies, but as this tree is not abundant in the states or easy to grow, it should not be used for these purposes. 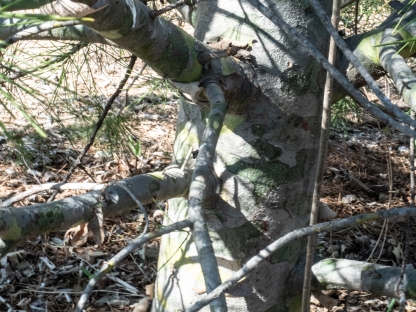 E2 Lacebark pine (Pinus bungeana) is located behind the fire station on Bryan Avenue, along the drive to the parking lot for the forestry department, next to the mugo pine.

To find the lacebark elm (Ulmus parvifolia) E48 head to the parking lot near the ballparks. It is on a peninsula in this parking lot just about halfway between Mountain Ave and Oak Street.