The tree grows under conditions which may prove too harsh for other species.

Limber pine (Pinus flexilis) is another species which may be susceptible to damage from the pine beetle. Like most other trees, this species has a number of alternate names, including Rocky Mountain pine. This conifer is native to the western states as well as the two westernmost Canadian providences.

Limber pine survive stressors which may prove too harsh for other species. For instance, it is able to grow under dry conditions. The bendable property of its branches may allow it to survive in avalanche prone areas and this trait may help with slope stabilization as well as runoff control. Limber pines also have deep taproots, which help with resistance to wind. This species provide food for rodents and birds, such as the Clark’s Nutcracker. In turn the seeds are too large to be blown far by the wind; birds, then are a means of distribution. 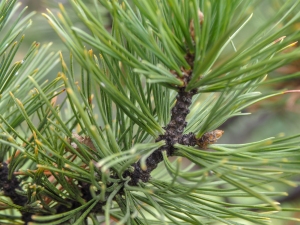 Although lumber from Pinus flexilis is of little commercial value today, in the past it was used in mines, as railroad ties, and as firewood. In herbal medicine the resin may be used like that of other pines—as an antiseptic and to help with respiratory conditions. The seeds can also serve as a food source for humans.

Limber pines are a long-lived species, which may not reach maturity until 200 years. (North American Trees, Preston and Braham.) Some of the oldest trees may be well over 1500 years. Even though some members of this species grow on windy ridges causing  twisting and stunting, others may approach sixty feet in height.

Pinus flexilis belongs to the the group of pines with their needles in bundles of five. These leaves grow to be between 2.5 and 3.5 inches in length. The female cones are green prior to maturity and may grow as long as seven inches.

Like many conifers of the mountain west, the limber pine may be affected by climate change and damage by various pests, including mountain pine beetles; a fungus which causes white pine blister rust; and drawf mistletoe. The fungus spread from Asia to Europe in the 1860s. It made its appearance in Wyoming on limber pines in 1970 and by the late 1990s was found in Colorado as well.

To find the tagged LIMBER PINE (Pinus flexilis) in the arboretum, C182, start near the SE corner of Sheldon Drive and City Park. A row of trees, including ashes and conifers, runs more or less parallel to City Park Drive. The limber pine is in the middle of a small cluster of conifers. In the middle of an open area is a park bench which is west of this small grove of trees. Another landmark might be the exercise station near this same corner. You could walk from there along the row of trees to find the pine.

This specimen was planted in 1981 when it had a diameter of 8″. In the flesh it does not appear quite as scraggly as it does in the winter photo. 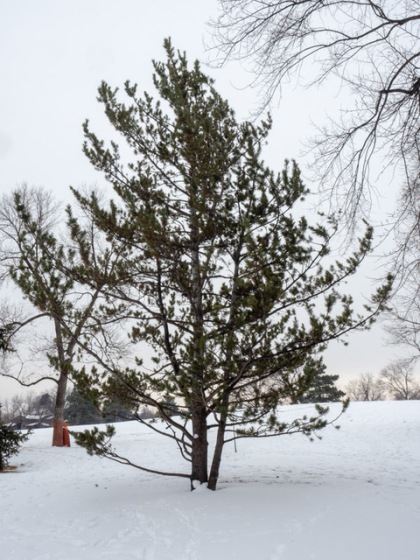 Limber pine in the snow