The cones and needles may be the clues to telling firs from spruces.

Many years ago I went on a ranger talk in a national park and have always remembered the meme “Friendly fir, prickly pine.” A lot of good that does when it comes to spruce, although a landscape architect friend added “spikey” for spruce. After running my hands over the leaves of some of the firs, though, I don’t think that learning aid is completely accurate. Many firs and spruce look disconcertingly similar. The Norway spruce, Picae abies, even shares part of its name with the firs, whose genus is Abies. One way to tell a spruce from a fir is the direction in which the cones grow. Usually trees with cones pointing up are firs. The needles on firs are also flat compared to those of spruces. In the photo below, all the pieces, except the White Fir, lie flat on the background. In the case of the subalpine, the Nordmann, and the Fraser fir, the backside of the needles can be seen to be of a lighter color, too.

There are six identified true firs in City Park. Of these, the Subalpine, Corkbark, and White Fir are native to Colorado.

Subalpine fir (Abies lasciocarpa) ranges over the western half of the continent. It is also native to Larimer County (Flora of Colorado, Jennifer Ackerfield, 2015.) The tree itself is useful in watersheds and rehabilitating the land. Various parts of the tree were of use to Native Americans as shingles, bedding, and medicinally. This species normally does not produce cones until it is twenty or more years old. Most of the Colorado state champion subalpine fir are found in the San Juan National Forest. The oldest trees, including one found in Wyoming, are around 500 years old. The tallest measure over 172 feet.

The Corkbark (Abies lasiocarpa var. arizonica) is a variant of the subalpine fir found only in Colorado, New Mexico and Arizona. It does not produce cones until it is over fifty years of age. Trees can be found on Wolf Creek Pass and in the mountains of northern New Mexico, although the champion tree has been listed variously as in Arizona or near Ruidoso, NM.  Its wood is the lightest of American trees and has little value as lumber.

Grand Firs are native to the Northwest. The layout of the needles on this conifer seem to be the flattest of the firs in the park and have an almost fernlike appearance. The trees take 200-250 years to mature and are grown for Christmas trees in this country and for lumber in Europe. Native Americans used the needles medicinally, as well as for a baby powder and a cure for baldness. The essential oils of firs have many uses including as a stimulate, deodorant, expectorant, and air freshener.

The Fraser Fir is found in limited areas of the American south. Due to its remoteness and small distribution, its primary use is in watershed management. It is also grown commercially for Christmas trees. Sources list various types of trees as the best/most popular for Christmas; the Fraser fir is usually toward the top of the list. Fir varieties have been used for the Capitol Christmas tree fifteen times.

Trunk of the Fraser fir

The Nordmann Fir (Abies nordmannia) is native to Asia Minor, where it is a popular Christmas tree.

The last of the six firs mapped in the park is the White Fir, (Abies concolor) although the tag could not be located. As can be seen on the mat with the needles above, this tree does not look that much like the other firs in the park. Its leaves are 2-3″ in length and it doesn’t lie as flat, although the individual needles are so flat they seem one dimensional!

The white fir is seen throughout most of the west and, according to the USDA map, is also native to Maine and Massachusetts. The US Forest Service distinguishes between a California white fir and a Rocky Mountain white fir. On conifers.org, another writer says white fir may be a catch-all name and that the species may have geographical variations.  The Forest Service mentions the trees can live between three and four hundred years. It is of significant use for wildlife, is used for Christmas trees, some smaller construction projects, and for food containers as its wood has little odor.

Yosemite boasts the largest white firs of the California branch of the species. The tallest tree in the Rocky Mountain group can be seen in the Hermosa Creek area of the San Juan mountains, the same area of the tall Colorado Blue Spruce. 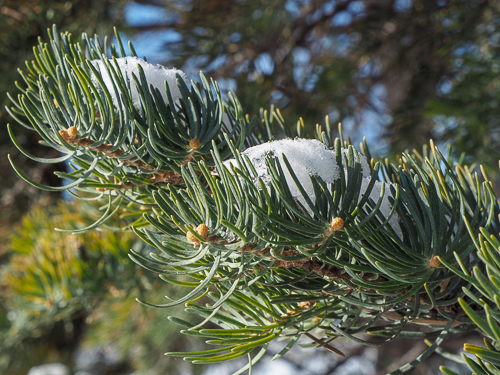 Leaves of the white fir

Locating the Firs: All but one of the tagged firs are on the west side of the park, west of the ditch. It is probably most advantageous to park near the pool or in the ballpark lot. If you are walking, you could start at either end. The directions below are from the ballpark parking lot.

Nordmann Fir (Abies nordmannia) E41 This fir is located between the Fort Collins Housing Authority, 1715 W. Mountain, the building at the far N end of the ballpark parking lot, and the N baseball diamond. It is the only evergreen tree planted by itself in this spot.

Grand Fir (Abies grandis) E31 From the south section of the parking lot, walk between the the restrooms and the office building. The Grand fir is the evergreen just past the pedestrian bridge over the ditch that runs along S. Bryan. (If you are walking from the main body of the park, it is easy to cross the bridge over the ditch. The Grand Fir is then the first evergreen to your left.)

Fraser Fir (Abies fraseri) E29 Continue walking past the basketball court to the small clump of trees, three of which are conifers. The smaller tree planted by itself is the Fraser Fir. The tag is up quite high and may be difficult to read.

White Fir (Abies concolor) E28 Just beyond the Fraser Fir are two towering trees. The tree to the west does not look particularly healthy. The tree to the east should be the White Fir, but its tag is not to be found. (If you DO find it, please let me know in a comment.)

Both the white and Fraser fir can be accessed from City Park Drive by entering the park through either the entrance to Shelter #7, or an informal entrance between a break in the fence and the stonewall of the road bridge over the ditch.)

Subalpine Fir (Abies lasiocarpa) E19 The last fir in this area of the park can be located by walking W toward the Big Chair, which is an example of Art in Public Places. The subalpine fir is just south of this chair, the only evergreen in the area.

If you are viewing this specimen on a separate occasion, you could park in the golf course parking lot and walk back along the road to a break in the fence. The tree is then to the East.

Corkbark Fir (Abies lasiocarpa var. arizonica) C132. This tree is at the opposite end of the park, along Jackson Avenue. It is across the street from 220 or 222 Jackson Ave, near one of the workout stations.