Lumber from the tree was crafted into prosthetic limbs.

When you look at the Ohio Buckeye (Aesculus glabra), it isn’t surprising that it is in the same family as the horse chestnut tree. Along with the maples and soapberries, buckeyes are members of the order Sapindales. The genus of the tree, Aesculus, is derived from the name of the Greek god of medicine.

Not surprisingly, the Ohio Buckeye is the state tree of Ohio (designated in 1953) and the symbol of Ohio State University.  Despite its name, it is also native to many of the eastern states and Texas. The current champion tree can be found in Kentucky. It may be one of the few trees associated with a political campaign, that of William Henry Harrison in 1840. Buckeyes were also one of twenty-one species under contention to be the National Tree but lost to the oaks.

The “nuts” of the buckeye are poisonous when eaten raw but are edible once the tannins are leeched out or the nuts are roasted.  When boiling the nuts, the resultant tannins can be used to tan leather.

A powder made of the buckeyes was also used by Native Americans to stun fish in ponds. If the above makes the idea of eating the nuts sound less than pleasant, there are also medicinal uses, such as using the powder in a salve for rashes and sores. The buckeye may have also been used for cerebral spinal treatments. A tea made from the bark may also help varicose veins and hemorrhoids. Lumber from the tree was put to another unusual medical use as it was crafted into prosthetic limbs!

Even though the fruit of the tree may not be something you want to eat, there is a candy called buckeyes. Basically they are a peanut butter ball dipped in chocolate.

To locate A86 Ohio Buckeye (Aesculus glabra) on the City Park Tree Tour, park along City Park Drive near the pool The Buckeye is in a line of trees between the two playgrounds. It is the largest of the trees and two in from the street. 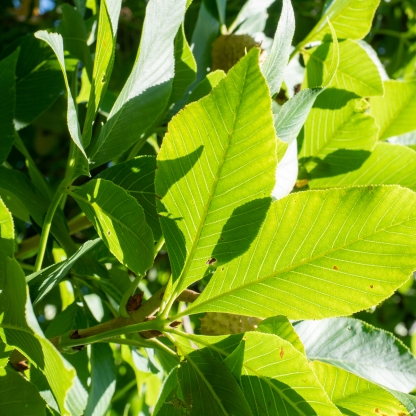 The leaves are smaller than those of the horsechestnut 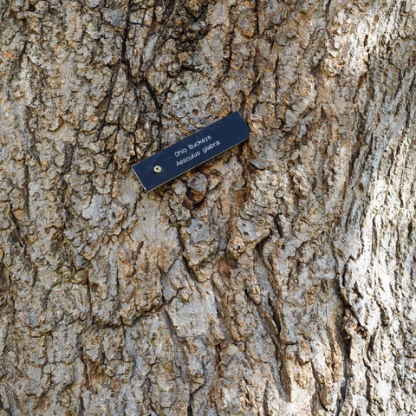 Bark of the Ohio buckeye