The Seven Son Flowering Tree (Heptacodium miconiodes) is supposed to have a profusion of blooms in early August. It is mid August. So far I’ve seen two small white flowers on the tree on the city park tour. Not sure if it bloomed and I missed it, it’s too young, planted in too shady a spot, or if it will bloom more fully at a later time.

This small tree almost looks more like a shrub than a tree and looks to have many smaller trunklets. Like the paperbark maple, this tree also has very shaggy bark. Many authors mention its interesting bark as adding interest to the winter landscape. 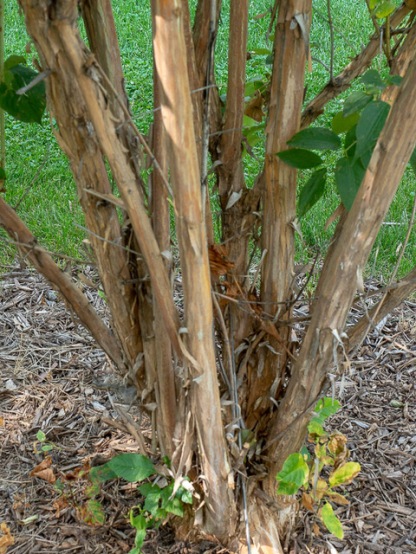 Many smaller “trunks” of the Seven Son Flower Tree

Although originally discovered in China in 1907, this tree wasn’t cultivated in the US until the 1980s. Like the paperbark maple, there are not many specimens left in China. This is the only plant in its genus and it is said to be in the same family as honeysuckle.

One of the oldest trees in this country may be seen at the Denver Botanic Gardens. The author of the write up for that tree also mentions that this plant has a lovely fragrance, although, again, this wasn’t noticeable at the time of my last visit. We did, though, manage to take a photo of the flowers, which I would still not consider blooming in abundance. The article mentions the seeds are spectacular in the fall and shows a photo of what appear to be red flowers. 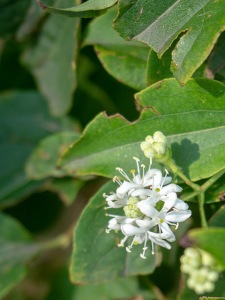 One use of this plant may be as an alternative to other shrubs which may be considered invasive or a nuisance in certain areas. This Old House suggests planting it in place of butterfly bushes in states such as CA and  NY.

To find A75 Seven Son Flower Tree (Heptacodium miconioides) park near the intersection of S. Bryan and Oak Street. This tree is behind the pottery studio on that corner. Maybe in late August you will be able to smell it or in the early fall it might be identifiable by its red flower-like seeds.